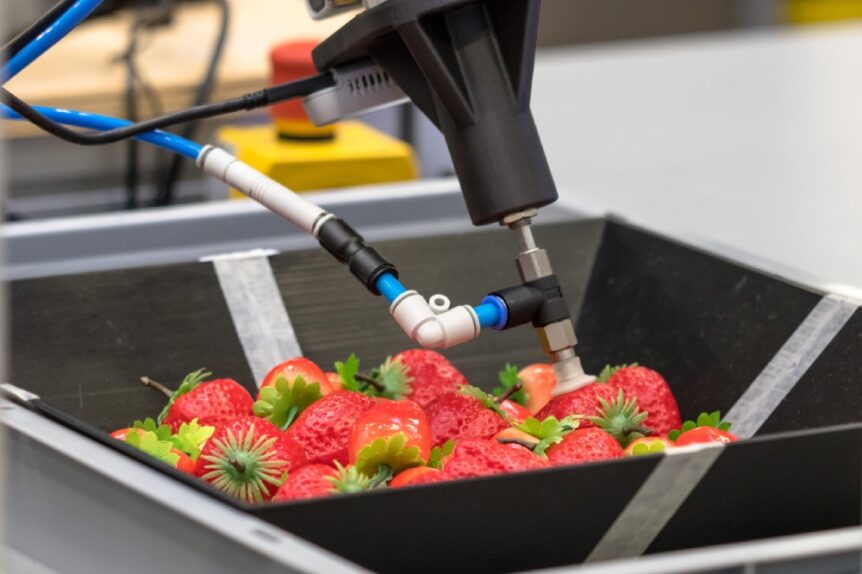 A robot that can teach itself how to pick up unknown objects has been developed by automation experts at the Coventry-based Manufacturing Technology Centre.

The state-of-the-art development allows single objects to be picked out of a random tray or bin, without the need for high cost sensors or lengthy programming. The process could bring huge benefits to the manufacturing, agri-food, logistics and waste management sectors among others.

The solution comes hard on the heels of a successful MTC project to develop a robot with decision-making capabilities for assembly operations.

MTC senior research engineer Mark Robson said, “This project has shown the MTC’s ability to draw upon state-of-the-art academic research to develop new technologies for UK industry. The result of this work is a flexible system that can quickly be adapted to the individual needs of different industrial handling problems without the need for complex robot programming.

“We showed that learning to pick on one object set can translate well to new objects, giving us an excellent starting point for new tasks. Building the system around a neural network architecture allows us to update the model as we gather new data in operation, enabling the system’s performance to continue to improve over time.”

He added, “Using simulation to automate the creation of training data significantly reduced the cost and time typically required to manually produce the large quantities of data needed to train a neural network.”

The MTC recently announced that it had developed a flexible industrial robot with decision-making capabilities. Using a combination of machine learning and visual recognition, the robot can be taught to make assembly decisions based on the components put in front of it, in a breakthrough development which could save manufacturers the costs of expensive fixed tooling.

Back to Editor’s Desk